All wood used for wandmaking has been ethically sourced. No tree or shrub has been cut for the purpose of whittling wands.* This means that the twigs and branches used have either been gathered from where they’ve fallen on the ground (e.g. through wind) or they were taken from general maintenance off-cuts that would otherwise have been thrown away.

I do this because I love trees and I love to see them grow and prosper. A fallen branch is a gift to be cherished, and if it’s cut off to give the tree or shrub new life, light and space to breathe and grow, that’s also a positive. Cutting a tree down just to satisfy a crafting desire feels wrong to me.

Because I couldn’t use the same kind of branches I use for whittling to make turned wands, I’ve had to purchase commercially lumbered wood, but it’s from FSC approved sources.

*To my knowledge, I’d like to point out. I sincerely hope that when I’m given twigs by friends, they’ve not gone and cut them just to please me, but rather because the trees/shrubs could do with a trim anyway.

All whittled wands are made from natural branches and twigs, so the shape, size and colour of every wand will vary – and no two wands will ever be exactly the same.

Most of the wands I create have some sort of pattern burned into them because I like to use the natural properties of the wood. There are exceptions, of course, as I like to experiment. The patterns or symbols I use are either made up on the spot depending on what feels right, or I trace it with a pencil first before burning, if it’s something that requires a bit of planning.

All wands are burned at the bottom end, as I like to think it “ties the wand together nicely”, but also because it would be very difficult get smooth with just sandpaper. And besides, it’s sort of become “my thing” now.

Free customisations available on request: Oiled wands can be burned with e.g. a name or a symbol, and/or they can even be lacquered. Customisations will mean at least a couple of days delay in shipping, as they need some time to do.

I’m mainly using a linseed furniture oil. Before 2015 most wands were finished with a coat of clear mineral/paraffin oil, a.k.a. “Skydd” from IKEA. If it says beeswax/linseed oil mix, I’ve used “Behandla” from IKEA.

The lacquer I use is a plain and simple clear half-matt acrylic hobby lacquer (water-based).

The tools I use are a Mora knife (Erik Frost 73/164), some sandpaper, and a Black & Decker Ci500 Craft & Soldering Iron Station. As of mid-June 2012, I’ve been using an Axminster Variable Output Woodburning Station, using a bit of CFH Wood Burning Iron when required.

Photos pre-September 2012 were taken with a Fujifilm FinePix S9600. From that time onwards, I’ve used a Canon EOS 1100D.

In September 2013 I got a WorkZone 40″ wood turning lathe. I thought it would be fun to have one and experiment with, but they usually cost far too much for the size I’d want, and take up a lot of space. And presto, Aldi had a simple one of a good (adjustable!) size for an okay amount of money, so I got one.

Using a lathe definitely isn’t as relaxing as a bit of quiet whittling in front of the telly of an evening! I still need to learn the best techniques with it. 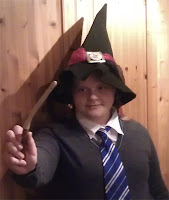 Unless you count bouts of whittling twigs for fun when I was a child, I started making wands properly in 2008, when I had to cut back a self-planted ash tree in the garden. I thought it was a shame to just throw such beautiful wood away, and decided to make a wand for a friend and fellow Harry Potter nerd. That way, I discovered it was actually a lot of fun making wands, and made a few more, and since then, I’ve come across more wood and haven’t been able to stop!

Aside from being into Harry Potter, I’m also a big Jane Eyre fan, hence the name Thornfield. I class myself as a Pagan, although when asked which Path, my response is invariably “erm … sort of … secular?” I’m very passionate about nature and care deeply about the environment (it’s a Swedish thing), but the whole religion thing just doesn’t sit right with me. However, my general beliefs slot in under the big umbrella of Neo-Paganism more than anything else.

My grandmother was big on embroidery and sewing, and my mother followed in her footsteps and started knitting at a very early age. My two older sisters both do that sort of handicraft, and … I’ve never taken to it. I know how to knit, crochet, sew and embroider, but I’ve always had more fun doing woodwork. Mum insists handicrafts are “good for the soul”, and as long as I get to do it with a stick of wood, a knife and some sandpaper, I couldn’t agree more.